What an honor! Chris was asked to be the head woman dancer at the California Hethushka & powwow on March 2, 2008 in Torrance, CA. Thank you Jerry and Diana Smith for putting in the recommendation!

In recent years Don has been dancing in the Hethushka war dance every March. Chris has always been there to support him, dancing in place at the side of the arena when necessary thoughout the afternoon and evening. It was quite an honor to be asked this year to be on the Sunday powwow head staff. 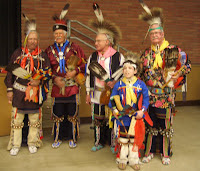 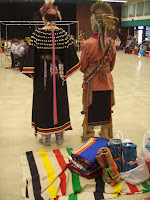 Chris and Don Tracy at giveaway

So many things to do to get ready for the Special besides running the Internet business and Dancing Bear craft supply booth! Chris asked Ben Hale, Dine, a close family friend and well known member of the Southern California Hale family, to speak for her. Always an elegant speaker, he did a wonderful job! Thank you Ben! 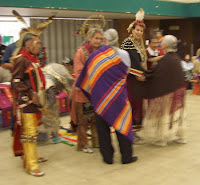 Chris also invited her good powwow dance buddy, Carolyn Reyes (Ojibwee), to be her assistant and help her dress for the powwow Sunday morning. Carolyn also made sure Chris was on time to start each dance during the afternoon! Not much time for visiting at the side of the arena when you are Head Dancer! Carolyn is an elegant, accomplished and champion traditional jingle dress dancer. In 2006 she placed 3rd in Golden Age Jingle at The Gathering of Nations Powwow!! Thanks for all the help! And thank you to Fidel, Carolyn’s husband, for helping with the gifts during the Give Away. Fidel had a whole system worked out for it! 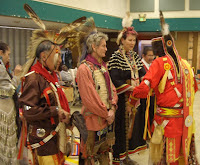 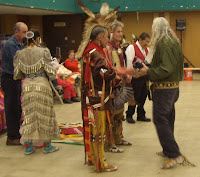 Chris honored those who support her in the community as well as the California Hethuska and the Ponca drum, headed by Henry Cummings. She called up Saginaw Grant, Ben Hale, Jerry and Diana Smith, Ken Tsuji, David Moller (the Head Man), Frank Turley, Ty Stewart, Darry Wood, Barbara Stumbling Bear, Pete Buffalohead, Barry Hamilton (Southern Cheyenne, who stood up with Chris as family), and Carolyn and Fidel Reyes.

What a wonderful afternoon!

For more information about the California Hethuska: